We are still using a few sets of Hope brakes and getting on with them well enough as per our review of the E4 , but we've felt that there is some room for improvement with the setup. This week we worked out a cheap easy solution to our problems.

The 'too much lever throw or travel' issue has been a common complaint online with Hope brakes for a while, and one we struggled with ourselves. As per our review one way we found to alleviated the issue a little by over filling the reservoir by a few millilitres.

With lockdown in full effect in the UK we decided to spend some time working on this issue and try and see if we can get our E4 brakes working as we would want them ideally.

Step 1 was to get some new bigger rotors, previously we had been using 180mm which with our Shimano XTs was more than enough. We have been using the discs for a while though so they did have a pronounced lip on them. Shimano discs are 1.8mm when new so we decided to replace them with some Galfer 200mm rotors but the 2mm versions. The thinking here would be it would reduce the free stroke of the lever on the Hopes and give us a more direct feel.

The new Galfer rotors did help, and we upped to 200mm as well to try and increase the power a little. The issue of there still being too much dead travel for our likeing remained however.

Taking a look at the levers we noticed that the reach and bite point adjuster are both threaded.

We found a nut that fitted and screwed it onto the BPC bolt a few turns. Voila! Instantly this then gave an extended range of adjustment so we could get the brakes to come on immedialty if we wanted, or have as much dead stroke as we wanted.

Doing this got rid of the need to overfill the brakes and gives you a full range of adjustment to get the levers feeling exactly how you want them. It's also a tidy, discreet solution that is very very cheap and requires no permantent changes to the brakes. It would be nice to see Hope offer a longer bolt themselves as an after market option. 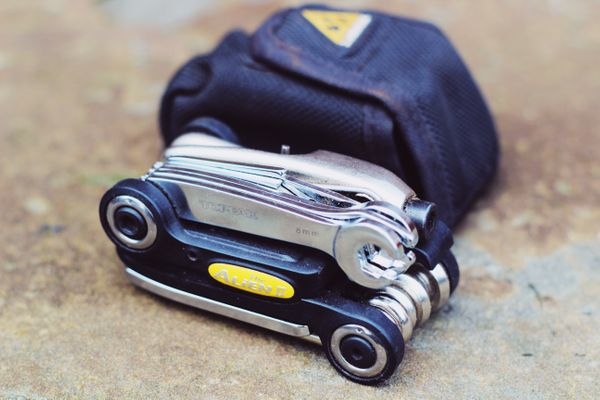 Topeaks bigger mini tool Alien series gets tested with the Alien 2. How does it compare vs the Mini 20 Pro?